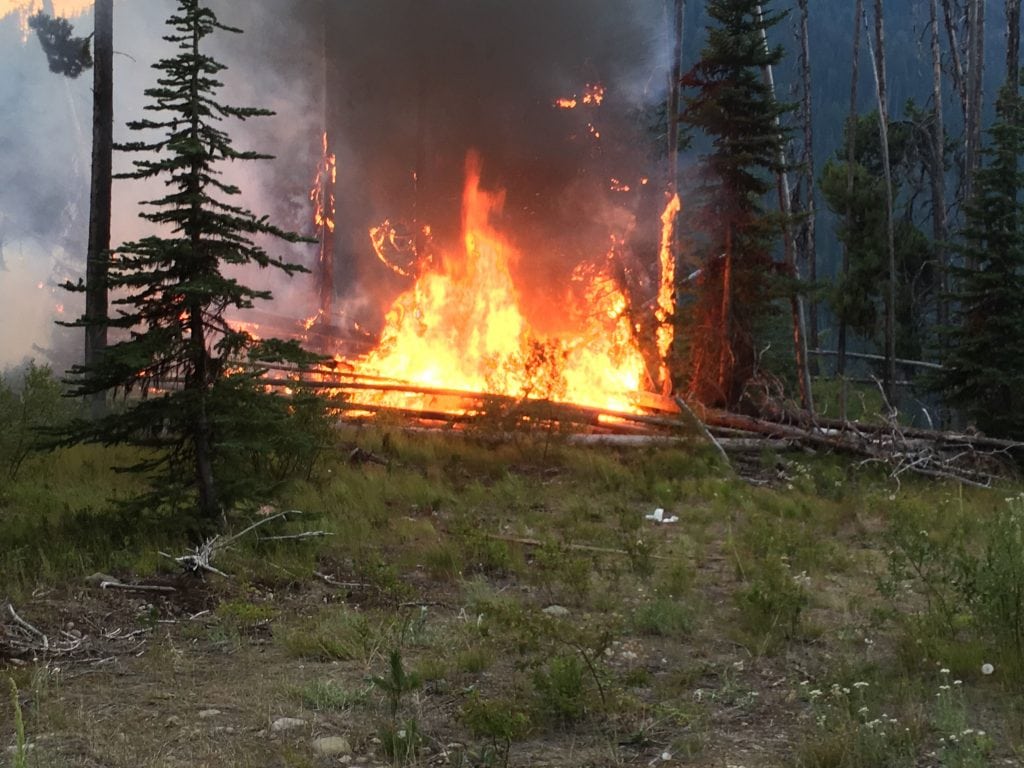 A forest fire that started in Manning Park on Sunday, August 5th, 2018 of the BC Day long weekend threatened to escalate quickly with the tinder dry conditions in the park, but a quick response time and incredible effort from the Manning Park community was able to quell the flames and get the fire under control by the time the BC Wildfire Service arrived.

A forest fire on a hill above Coldspring Campground on Highway #3 was reported by a camper at approximately 6:30pm. A small amount of smoke was reported, and in a short period of time, open flames were visible and moving quickly.

Manning Park Resort coordinated efforts to gather qualified staff and resources to head to the site of the fire, which was located on the north side of the highway, directly opposite Coldspring Campground. They were quickly joined by BC Park rangers stationed in the park and the East Gate Fire Department, which consists of trained, local residents.

Andy Boulé, Manning Park supervisor, said “it was amazing how fast it changed.” From the initial reports of smoke, they arrived to find 20 square metres of fire, that was “aggressively burning, and going up the trees,” says Boulé.

“Fortunately, it was easy to access the fire as there is a road leading directly to where the blaze started,” general manager, Vern Schram states, who was on the ground fighting the fire himself. “It was an amazing cooperative effort to get the resources on site quick enough to contain and fight the fire, which took upwards of four hours.”

BC Wildfire Service were alerted upon the initial report, and sent a 3500-gallon tanker truck of water to help facilitate fighting the fire, “for which we were very grateful for,” says Boulé. “Water is a precious resource when fighting fire, and we were shuttling back and forth to refill before it arrived.”

A BC Wildfire team arrived later and worked cooperatively with the Manning Park community to fight the fire until midnight, when it was deemed extinguished, with ongoing follow-up to ensure it didn’t reignite.

“We were so lucky there was no wind,” says Schram. “All the things that could have gone in our favour did, and for that we are incredibly grateful.”

Schram wishes to publicly thank the integral efforts of the Manning Park team, including park supervisor, Andy Boulé, and assistant supervisor, Toby Kelly, as well as the BC Park rangers, Kane Kopp and Art Goertzen, and notably, Roger Bean and the East Gate Fire Department. “We are grateful to our community for jumping into action with this emergency,” he says.

While this is a good news story of the community effort to prevent the escalation of this forest fire, Schram says it is a “near miss” and it highlights the essential need for caution during the hot, dry summer.
When asked whether it was human-caused, Schram says, “We are speculating from some recent garbage in the area of the fire, including an empty pack of cigarettes, that this was not caused by mother nature.”

Campers at Coldspring Campground had front row seats to see and hear the ongoing fire efforts, but there was no threat to campers or Manning Park Resort. Ongoing communication with the campers kept them in the loop, assured them they were not in danger, but if the situation changed then they would be alerted.

Telus is conducting ongoing repairs regarding our network outage. This may cause temporary cellular and internet delays or outages over the next couple days.

We appreciate your patience as we resolve this issue.