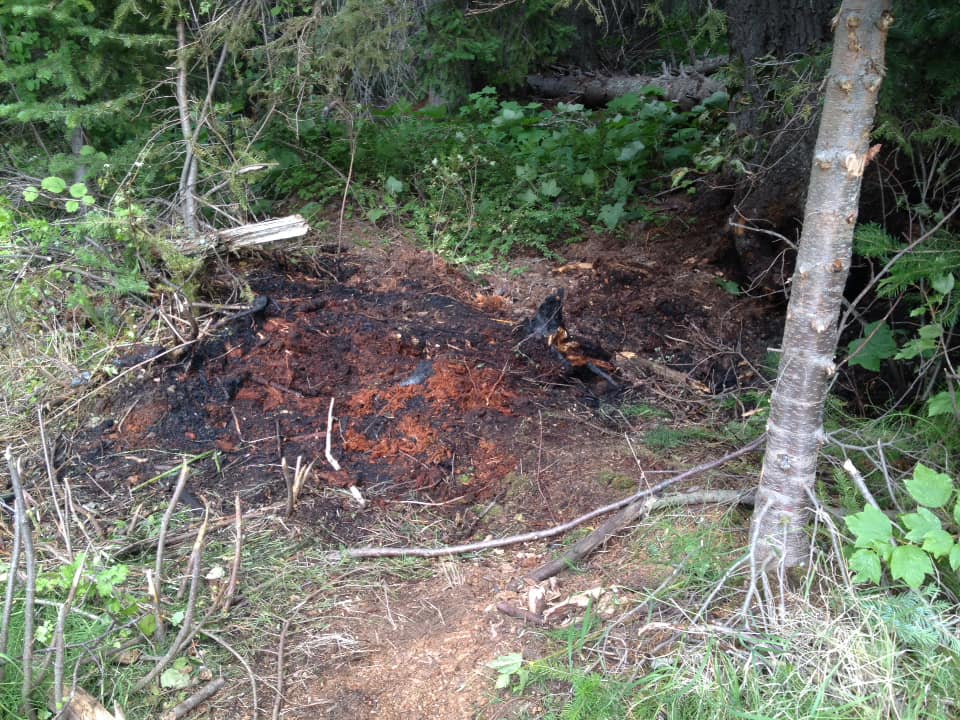 Although it has been a summer with a much-reduced wildfire risk, a wildfire scare in Manning Park on August 16th was a stark reminder to stay fire smart. A fire was discovered near Flash Lake, but thanks to the dedicated actions of two families of hikers, the fire was extinguished.

Rick L. and his family were taking their first backpacking trip with their 5 and 7-year-old kids to Strike Lake, along the popular Lightning Lakes chain, when Rick saw some smoke near the shoreline of Flash Lake, in an area not permitted to camp or have a fire.

He messaged some co-workers via an InReach GPS satellite communicator, asking them to report the smoke, before going to investigate.

“Something didn’t sit right with me and I decided to hike around the lake while my family took a snack break,” Rick says in his Facebook message. Expecting to find some backpackers, he instead found a five square metre area that was smouldering and on fire. 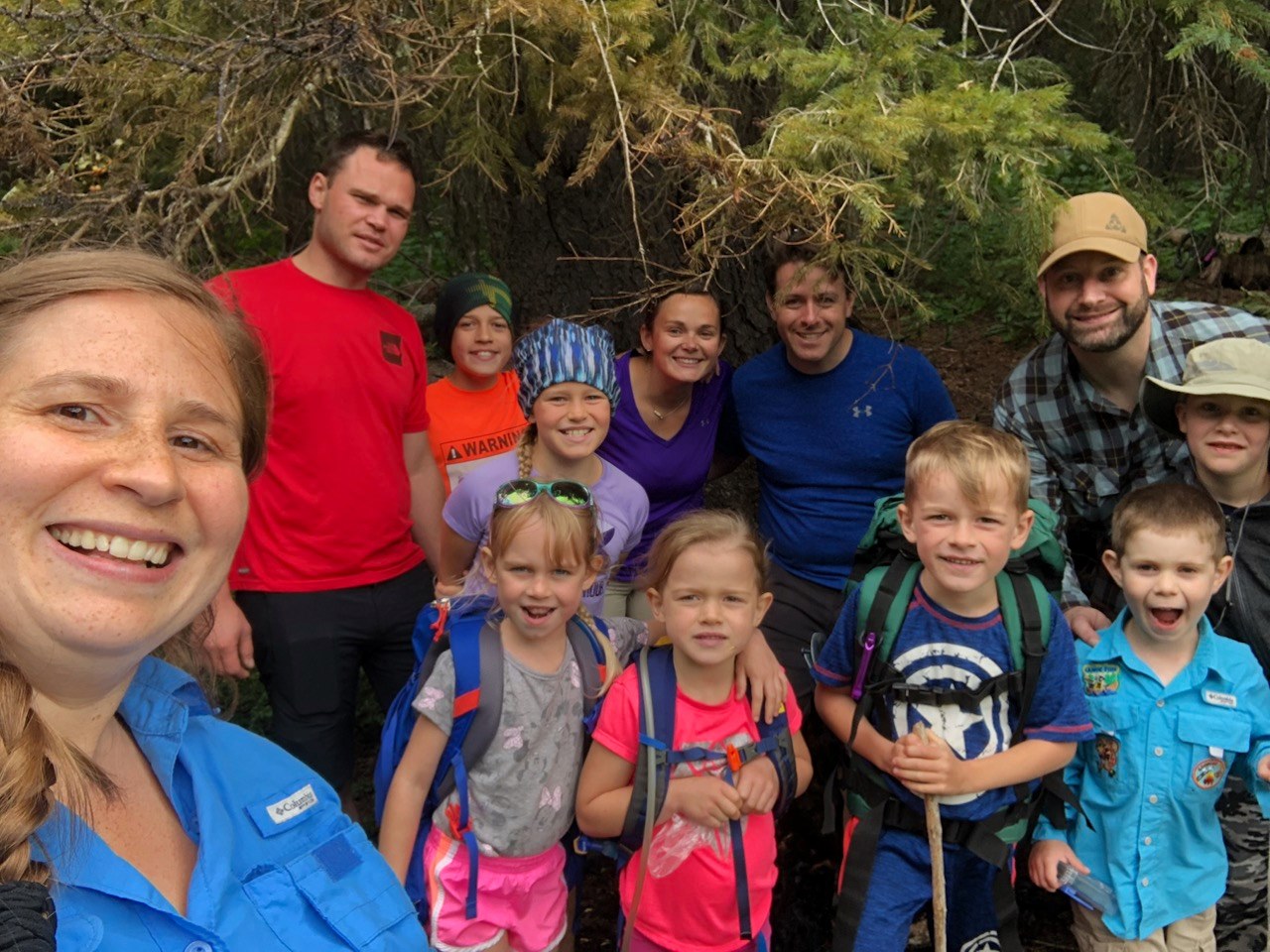 He returned to his family and they all began to help put it out. Being an avid hiker in Manning Park, he says, “We would not sit by to watch the beginning of a forest fire in one of our favourite places to hike.”

After sending another emergency message, Rick cleared brush and trees to remove fuel, while his wife, Andra, hauled water from the lake about 5m away. “My two boys helped by poking at the extinguished areas and throwing small branches and undergrowth into the lake,” he says.

With a dry forest and a concern about an increase in the winds, the fire had the potential to expand quickly, so they kept at it, while keeping safety in mind.

After about 2 hours of working to extinguish the fire, another family of 3 adults and 5 children happened along. Andrew and Paige Irwin and their family were keen to assist in the efforts and jumped in.

“We continued to dump water on the fire with our Osprey Dry bags, about 10 litres at a time for about 3 hours and what I can best guess would have been over 1500 litres of water,” Rick says.

A Manning Park crew attended after hearing the call and found that the fire had been extinguished already and the hikers had moved on with their hike to Strike Lake.

A BC Wildfire crew also attended with a helicopter to put it out.

Park Area Manager, Andy Boulé, tells the perspective from the Manning Park crew who attended; “We mobilized a small team of 4 of us and grabbed portable water tanks and tools and started the hike in. We arrived just before the helicopter so must have just missed seeing you guys,”, referring to Rick’s family and Irwins.

“We did a bit more digging and spraying to confirm the fire had no hot spots under the roots. When the BC Wildfire crew got there, they confirmed as well.”

Although Boulé and the BC Wildfire team didn’t meet the hikers, after posting about the scare on the Manning Park Resort Facebook page, the full story came out from Rick. Speculating that they probably had very limited resources, Boulé says, “While there, we all were very impressed with the job you did!”

Boulé responded to the family, “It is obvious by your actions that you love the park too and I am proud to have such great stewards and friends of Manning out there helping! Thank you so much for your caring and effort!”

In Rick’s post, he commented how the whole family found it quite an adventure and they were glad that they were able to protect the park that they all love, but after all that hard work, they needed a vacation!

Manning Park Resort recognizes the incredible efforts made to protect the park from these two families and have offered both families another vacation to Manning Park Resort, with a night in one of the new premium cabins and their choice of boat rentals or ski lift tickets. Hopefully, this will be a vacation where they can relax! 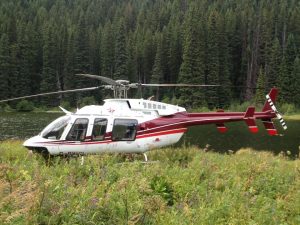 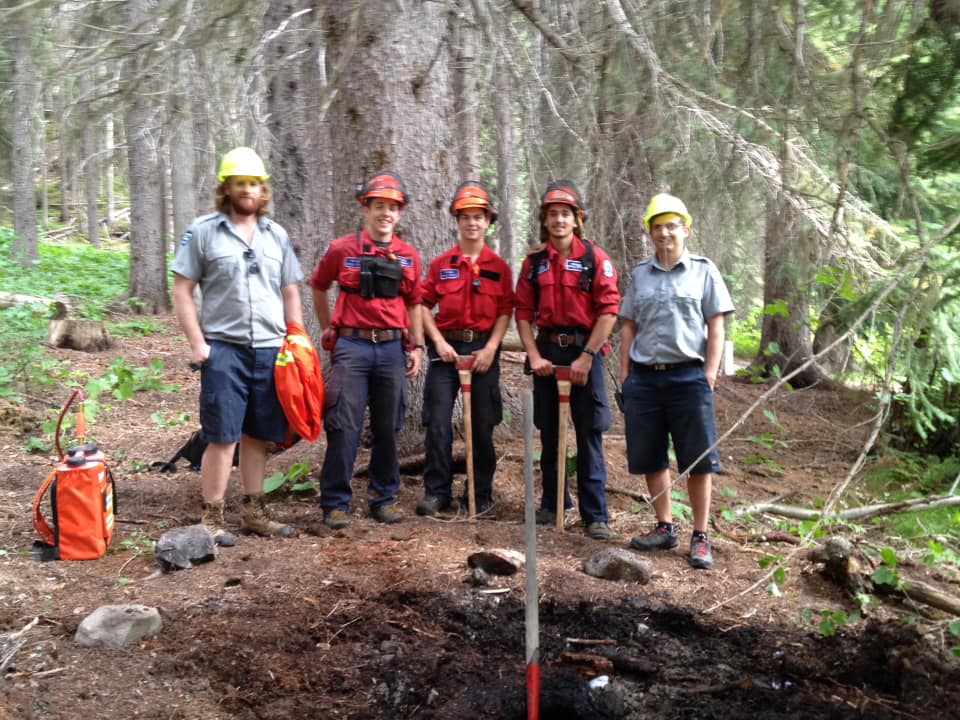